Arsenal skipper Pierre-EmerickAubameyang took his barren run in front of goal to three games after he failed to find the back of the net on the final day of the Premier League season at the weekend. Pierre-EmerickAubameyang was overshadowed by fellow African star Nicholas Pepe as Arsenal ended the season with a 2-0 win at home to Brighton and Hove Albion. 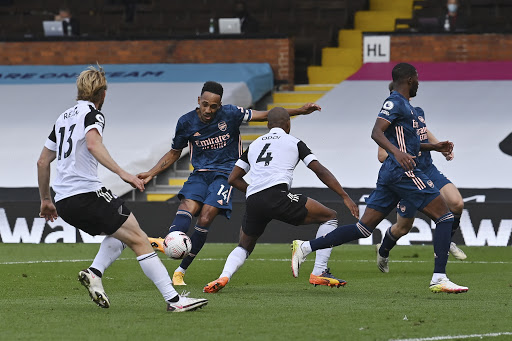 Arsenal started the Brighton game with a good chance of making Europe next season and with Aubameyang as the lone striker but he was largely anonymous as the Gunners did the double over the Seagulls for the first time in the Premier League era thanks to the 2-0 win made possible by the abovementioned Pepe. The in-form Ivorian national team player was the difference between the two teams.

The Gunners went into the Seagulls clash on the back of four straight wins in the Premier League having secured victories against teams like West Brom, Newcastle United and the London duo of Chelsea and Crystal Palace. Arsenal dominated the first half but were not able to score the goals needed to give themselves the chance of qualifying for the newly introduced European Conference via seventh position.

Pepe scored two goals in the impressive 3-1 away win over Crystal Palace on Wednesday night and he broke the deadlock against Brighton at the start of the second half before he added his brace later in the half to give his team the much needed victory in front of the fans who were returning to the Emirates Stadium for the first time in five months. In the end, the win over Brighton was not enough for European football at Arsenal. The Gunners were piped to seventh spot by Tottenham Hotspur who came from 2-1 down to beat Leicester City 4-2 away from home with three late goals.

For Pierre-EmerickAubameyang, his scoreless run extended to three games after failing to find the back of the net against Brighton. He had earlier fired blank in the last two games against Chelsea and Crystal Palace.